“Democracy Dollars” (the $25 campaign funding voucher idea on this Fall’s Albuquerque ballots) is being sold as an effort to get big money out of local politics. That couldn’t be further from the truth. The groups supporting “Democracy Dollars” have raised $400,000 on their cause (much of it from out-of-state).

You can find the latest financial report here.

Other reports can be found here.

On this single report (covering just a week’s worth of time) you can see that the well-funded, socialistic, “Working Families Party” contributed more than $83,000 between 10/12/19 and 10/18/19 alone.  Other prominent financiers of the campaign include usual suspects OLÉ and Planned Parenthood, as well as out-of-state funders like: Rethink Media (based in Berkeley, California), Stand Up America (based in New York City), and the Center for Popular Democracy (based in Brooklyn).

Truly this is a well-funded, coordinated attempt by the big-money supporters of these left-wing groups to take over our local elections. Early voting is going on now. Be sure to get out and vote. 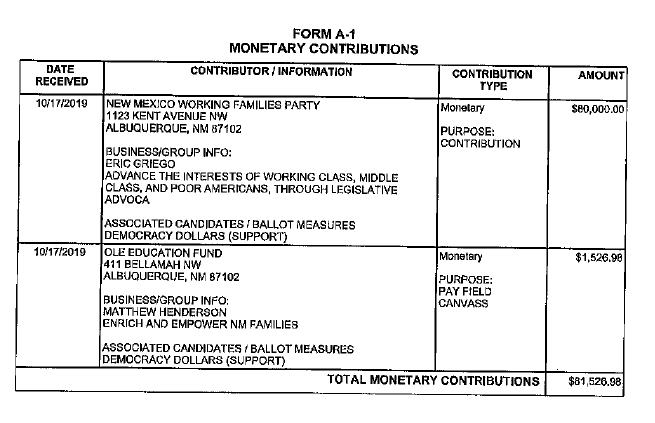