The ART system isn’t running at all and won’t be for over a year, but Mayor Keller’s billion dollar budget proposal includes money for it AND increases overall transit spending by 8.7 percent.

As big of a waste as ART has been it is not as if Albuquerque’s bus system in general has been a success. As this excellent report from KRQE Channel 13 notes, “ridership is down and is expected to bring in just $4 million in fares.”

As Transit Director Bernie Toon notes in the story, “Our fare box revenues, the money that we take in on the buses, varies from about 7 to 10 percent of the total cost of running the buses.

That’s an incredibly low number by industry standards. Fares cover around thirty percent of the costs for most mass transit systems around the country.”

So, we decided to offer some comparisons. Unfortunately and probably for political reasons, transit agencies aren’t always excited to release this data (farebox revenues don’t include capital costs at all), but as can be seen below 7-10% is REALLY low. 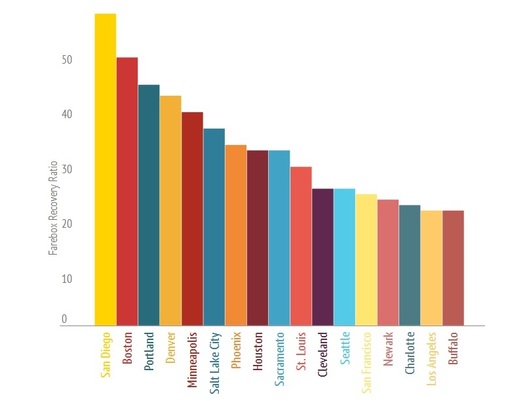