The following appeared in the Current-Argus on December 11, 2019.

According to the latest estimates from Santa Fe the state’s general fund budget is expected to be $7.882 billion next fiscal year. When Gov. Martinez left office in 2018 the budget was “only” $6.3 billion. In two short years, New Mexico’s budget will have grown by more than $1.5 billion, a 25 percent increase.

With the current group in charge New Mexico government is going to grow fat on oil and gas revenues while average New Mexicans pay higher taxes due to hikes passed during 2019.

There’s a better way to use the surplus and we don’t have to look far to find it. Policymakers should visit Denver to see how fiscal restraint in “blue” Colorado has created that state’s booming economy. In 1992, Colorado voters approved a Constitutional amendment restricting taxes and spending at all levels of government (state, local, and schools). Under this law, taxes cannot be raised without voter approval and if revenues grow faster than the rate of inflation and population growth, the extra money must be returned to the taxpayers.

Last month Colorado voters once again affirmed that they want surplus revenues returned to them. By a rather overwhelming vote of 56-44, voters rejected a ballot measure pushed by the state’s political establishment that would have eliminated those tax refunds. Despite being a “blue” state, Coloradoans want to control government spending and they like their refunds.

If New Mexico had the same law (known as the Taxpayers Bill of Rights or TABOR) that Colorado has, it could change New Mexico’s economy for the better in short order. Rather than being spent by the worst-run government in the nation (according to 24/7 Wall Street) much of that $1.5 billion surplus would be returned to the people of New Mexico instead of growing its government. In fact, accounting for New Mexico’s slow population growth and the inflation rate (in essence giving government the same money in real terms as it had before the oil boom really started), you get just under $1.45 billion available to return to New Mexicans. If that money were divided by giving all New Mexicans (just under 2.1 million of us) an even share, that would mean a refund of $731.90 per person.

We can all fantasize about what we’d do with an extra $730 lying around, especially during the holidays. More importantly, Colorado which is like New Mexico in many ways (dependent on natural resources, land-locked with few navigable rivers, but with stunning natural scenery) is an economic dynamo while New Mexico lags. Yes, the ongoing oil boom has given New Mexico a boost, but our economy trails badly behind Colorado.

People notice these differences and vote with their feet. According to data from the Pew Center on the States, between 2008 and 2018 New Mexico’s population grew by 0.41%, the slowest rate of any state west of Kansas annually. Colorado, the third-fastest growing state in the nation, grew by 1.54% annually. And of course, like interest, that number compounds annually.

Colorado’s strict limit on government spending is not the only difference between the two states. But it is rare for neighboring states to differ so starkly when it comes to overall economic conditions and population growth.

By limiting government growth Colorado has unlocked its human potential and made itself a desirable destination. New Mexico has vast untapped potential, perhaps more than any other state in the union. We may never get the kind of constitutional limits on spending that Colorado has, but if New Mexicans demand just a bit more of this surplus be returned to themselves as opposed to being gobbled up by government, perhaps we’d begin to unlock it. 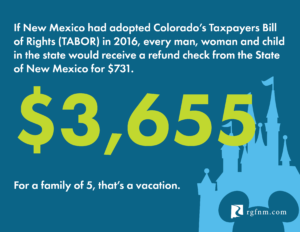