The Rio Grande Foundation tracks and rates legislation in New Mexico and has done so since 2014 (find our Freedom Index archive here). Bills are given scores as bad as -8 and as good as +8 and when those bills move to the floor for votes, the points with a “yes” or “no” vote are attributed to all of the legislators in both parties.

Currently just a few floor votes have been tallied, but that number is starting to grow along with the numbers associated with each legislator. We strongly encourage citizens and anyone interested in what is happening in New Mexico to check out our Freedom Index and use it.

A side benefit of our software provider BillTrack50 is some interesting “data nuggets.” For example, the chart below shows whether bills enacted by the Legislature and Gov. were sponsored by Democrats, Republicans, or both parties. Understanding that a Republican, Susana Martinez was Gov. from 2010 through 2018, Democrats remained quite influential in passing bills throughout that time.

Since Lujan-Grisham and the Democrats took over all three branches of New Mexico government in 2019, the number of GOP-sponsored bills passing began to shrink dramatically. Just one GOP-sponsored bill passed in 2022.

You can find out more interesting nuggets for yourself here. 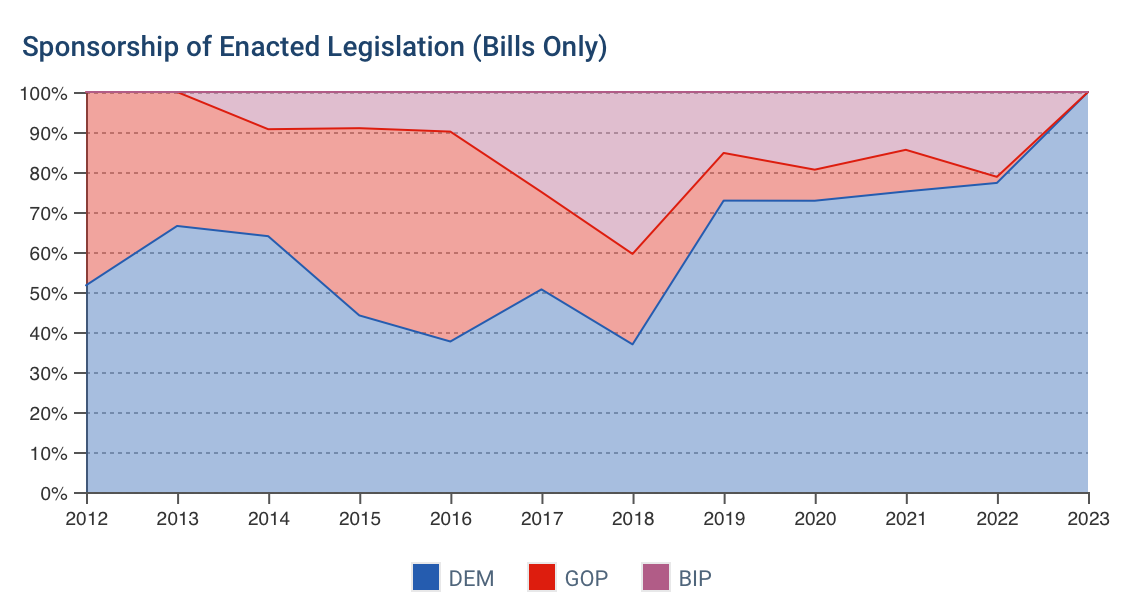 Considering New Mexico’s usual location at the top of the bad lists and bottom of the good ones New Mexico’s 31st ranking on a new National Taxpayers Union Foundation report which ranks the US states on their attractiveness as places to work remotely. You can find the full report here.

Since the COVID 19 Pandemic remote work has become an increasingly popular option including right here in New Mexico.

The authors had the following to say about New Mexico’s status as a work-from-home location:

While the states that come out best are those with no income tax, there are lots of other things that states can do to make their policy environments friendlier to remote workers.

The state manages to salvage an average rank by virtue of its 16-day withholding threshold. Though this is half the gold standard of 31 days, a 16-day threshold is a not-insubstantial protection. New Mexico could improve its rank further by reaching reciprocity agreements with high-traffic neighbors and instituting a filing threshold to benefit individual mobile employees.

To improve, New Mexico should consider adopting a defined-day filing threshold and raising its existing withholding threshold to greater than 30 days, as well as entering into reciprocity agreements with neighboring states.

Of course, with the massive surplus New Mexico policymakers have available to them, they could and should consider reducing income taxes. You can click through on the interactive map below.

In Sunday’s Albuquerque Journal two stories highlighted the self-inflicted policy issue that are pushing doctors out of New Mexico. You can see the articles for yourself here and here along with a telling chart below.

The stories echoed RGF’s solutions which include addressing the medical malpractice bill passed a few years ago, reducing Medicaid dependency, and eliminating GRT taxation of medical services (as we pointed out in a new report). One of the challenging aspects of policies like the medical malpractice bill (HB 75 in 2021) is that it was a “compromise.” Trial attorneys and Democrats were pushing even worse legislation on the issue, so final passage of the bill attracted support from numerous GOP senators (you can find out who at the link).

New Mexico’s problems (like nearly all of them) are driven by bad public policy. But until voters hold the politicians accountable for their bad policies, we will continue to get more of them.

We have already expressed our reservations about the New Mexico Legislature’s “favorite” consultant PFM and their recommendations. But, in yet another recent Albuquerque Journal article we (and the Legislature) are told again that if New Mexico’s oil and gas industry “go bust” the State will face dire budgetary and economic conditions.

New Mexico is indeed over-reliant on oil and gas, but as I point out below, that’s not the State’s biggest issue. Rio Grande Foundation is at the forefront of researching and advocating for policies that would diversify our economy, here are a few points PFM is missing.

1). See the chart below, oil and gas in New Mexico is being driven by new discoveries. Prices could go down for a sustained period of time and that would be a challenge, but oil and gas are not “going away” anytime soon. Stop the fearmongering.

2). With serious social and economic issues New Mexico policymakers should be considering ways to improve conditions right away. Unfortunately, the big-government approach that have been relied on for decades in New Mexico have ALREADY failed. PFM should recognize that fact.

3). Diversifying the economy and diversifying government revenue sources are not the same thing. It’s no surprise that their recommendations are so “off” given the consulting is funded by the left-wing Rockefeller Family Foundation. 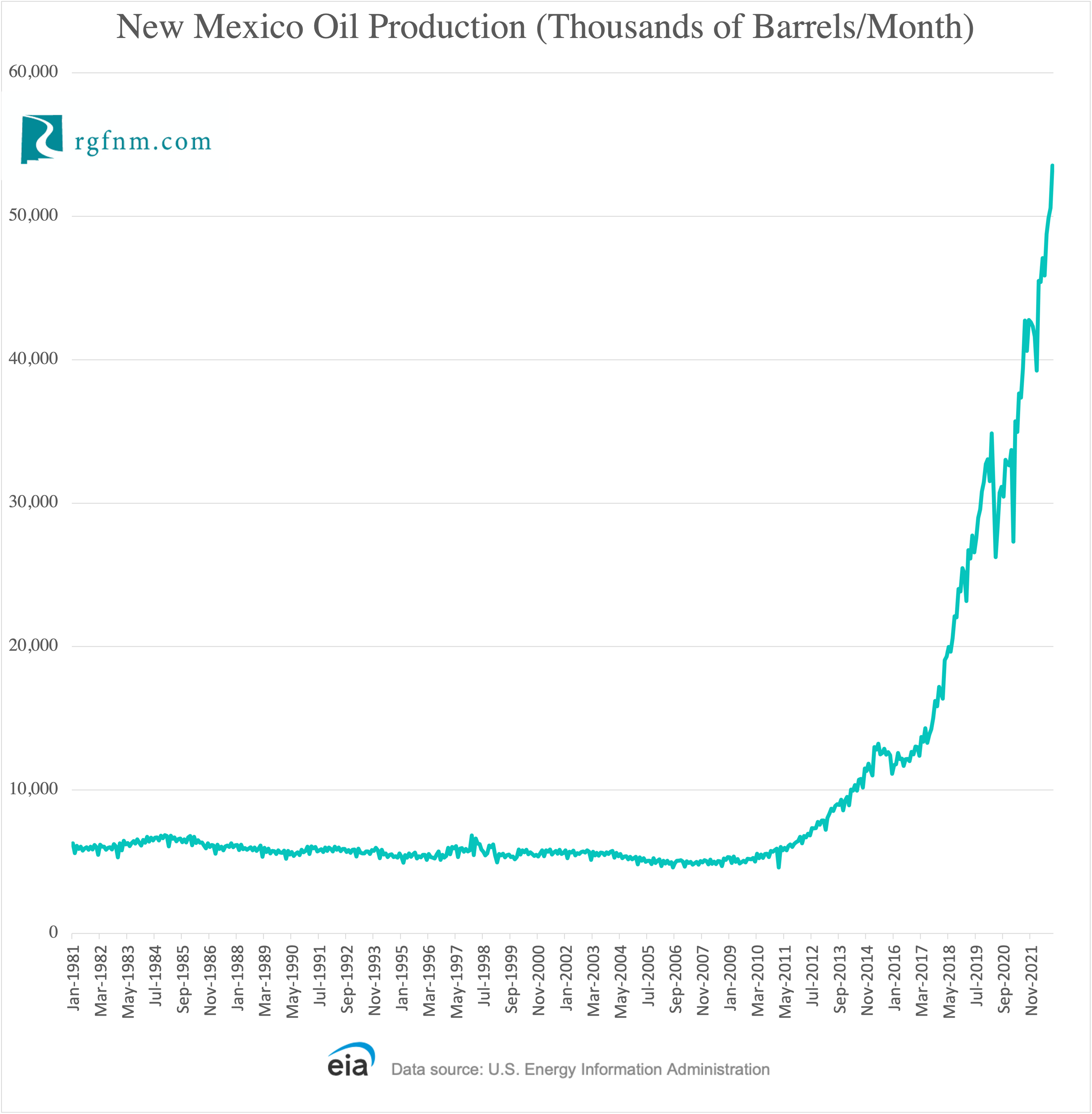 Several members of the Lujan Grisham Administration have departed recently in the midst of the legislative session. Paul and Wally discuss some of the more notable departures.

RGF recently released a study about the medical provider shortage.

Last week was School Choice week. Bills have been introduced on both the Democrat and Republican sides of the aisle to create choice. These bills will be heard in the Senate Education Committee on Wednesday, February 1.

Some bills reining in the Gov.’s emergency powers have passed out of their first committees and are on their way to House Judiciary Committee.

The Foundation’s Freedom Index bill tracking site is a tool people can use to find out how the bills they support/oppose are faring and how their legislators are voting on them.

A new Wallethub report says New Mexico has one of the smallest wealth gaps by race/ethnicity. This undermines a lot of left-wing talking points, but notably New Mexico is poor AND even the wealthiest in New Mexico don’t register relative to other states.

Anyone who follows New Mexico’s budget and politics is well aware that the State is going through an incredible oil boom. As can be seen in the chart below from the Financial Times, New Mexico now produces more oil than the entire nation of Mexico.

This is a testament the American ingenuity, but it is incumbent upon New Mexico’s Legislature and Governor to use this windfall to improve the State’s economy and move the state toward economic prosperity. 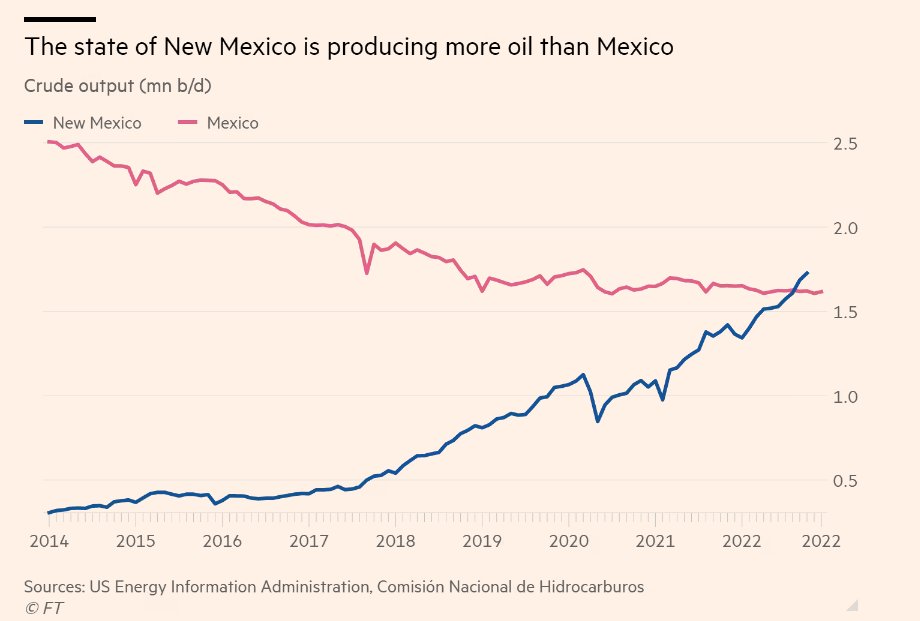 Most New Mexicans are at least vaguely aware of the outsize impact the State’s oil and gas industry has on the State’s economy. A new report from the Arrowhead Center at New Mexico State University called “State of New Mexico County-Level Revenue & Expenditure Analysis, 2015-2021″ highlights that economic impact by examining revenues and expenditures on a county-by-county basis.

The list of top-5 counties in terms of their net contributions can be found below. When contributions and expenditures (by the state) are taken as a whole, Lea and Eddy County contribute massively to the State budget with Los Alamos, Bernalillo, and San Juan counties all contributing significantly as well.

Interestingly, Santa Fe and Doña Ana both have negative net returns per person in the $10,000 range. Here’s the full report with data from each of New Mexico’s counties.

It is way to early to be optimistic about them passing, but for those who (like the Rio Grande Foundation) would like to see a restoration of balance of power between the Legislature and Gov. in future emergencies, a few bills that would restore that balance have moved through their first committees.

HJR 3 and HB 80 would require some form of legislative approval to change or end a state of emergency in New Mexico. The former would amend New Mexico’s constitution to do it while the latter would do it legislatively (constitutional amendments are lengthier but do not require the Gov.’s signature).

After nearly three years since the Gov. declared COVID 19 an emergency. According to the National Academy for State Public Health New Mexico is one of just eight states in a declared emergency and MLG shows no sign of letting go of her powers.

We hope that now that the 2022 elections are behind us the partisan Democrats in control of both houses will make separation of powers and “democracy” in New Mexico government a priority. 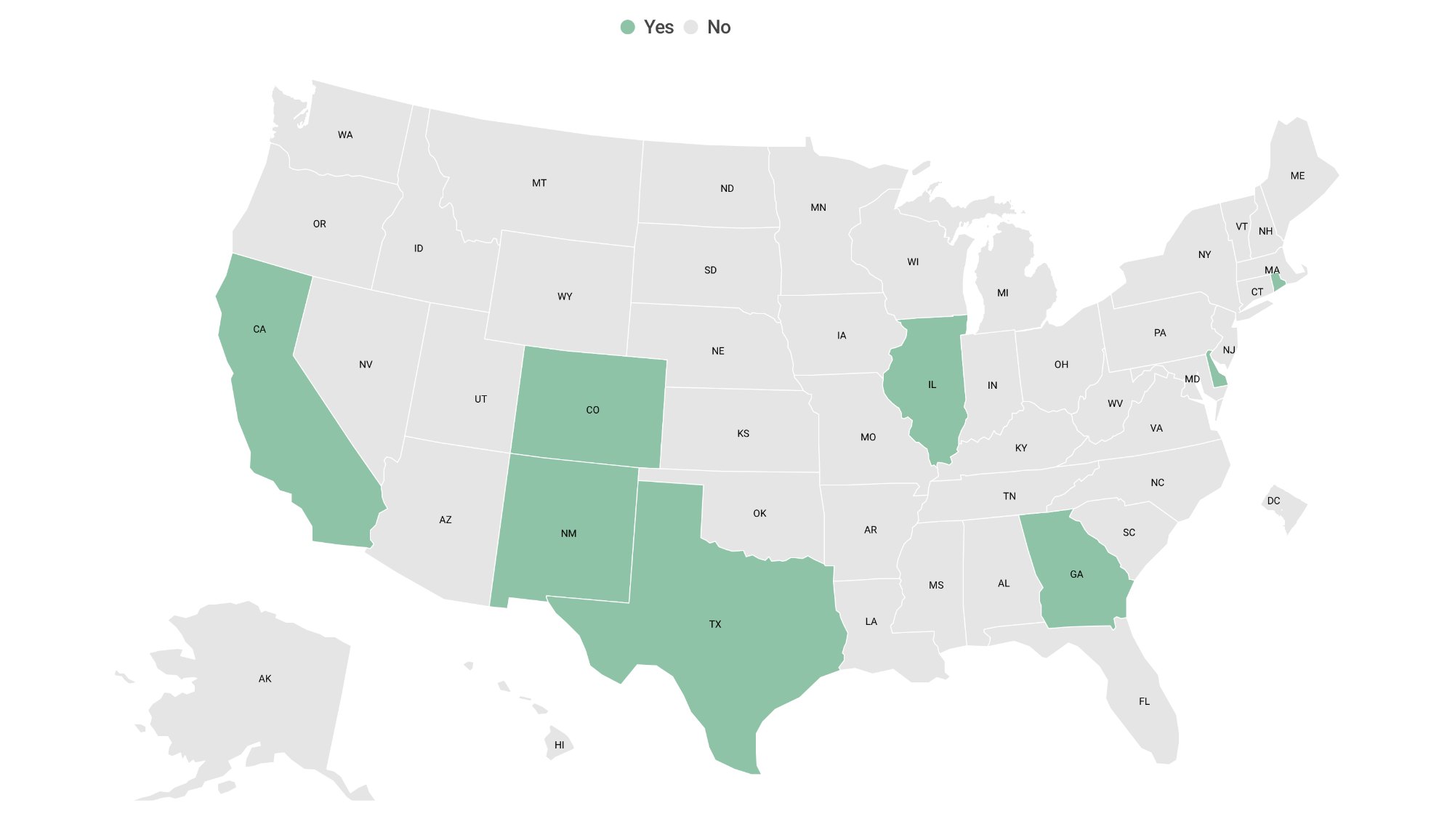 Despite New Mexico having an unprecedented budget surplus the “progressive” Legislature seems hell-bent on raising YOUR taxes.

HB 119 which is being sponsored by the Chairs of the House and Senate Tax Committees AND the Senate Majority leader is one of the most concerning bills of the 2023 session. It also highlights the rapid leftward shift of New Mexico’s Democrats.

Back during the Richardson Administration New Mexico’s top income tax rate was dropped to 4.9 percent and as the Rio Grande Foundation noted, they were successful in moving New Mexico’s economy in a positive direction.

HB 119 would create TWO new rates and would NOT index them to inflation, meaning that over time more and more New Mexicans would be pushed into them.

The bill awaits hearing in the House Tax and Revenue Committee, but given the sponsors it must be of concern. On this week’s interview Paul talks to his old friend Drew Johnson. Drew and Paul both worked in Washington, DC for the National Taxpayers Union (and Foundation). Drew and Paul discuss government waste and their past and current efforts to reduce it. Also, Drew recently ran for office in Nevada which allows for mail-in ballots and vote harvesting among many other questionable practices. You don’t want to miss this informative conversation.