This article appeared in the Albuquerque Journal on March 18, 2020.

Albuquerque City Councilor Pat Davis’s recent comments on expanding the city’s ban on plastic bags were out of touch, especially in this time of coronavirus.

The councilor recently said he wants to amend city law to get rid of plastic bags that are thicker than 2.25 thousandths of an inch. The thicker bags were exempted from the law for the simple reason they are considered “reusable,” but Davis thinks retailers and the public are abusing the situation and that it amounts to a “loophole.”

Davis recently stated, “If (retailers) keep bringing back new plastic bags, we’re going to keep banning them, and eventually they’ll get the message.” He anticipates the city will try to ban more bags this summer.

In the meantime, due to coronavirus concerns, major retailers are rightly emphasizing public safety above environmental concerns. Dunkin’ Donuts and Starbucks are just two of the largest companies that have disallowed the use of reusable cups due to health concerns.

Apparently Davis has no concern about the impact of the virus, which has disrupted all facets of American life. This isn’t mere hyperbole on my part. The problem with reusable cloth bags preferred by Davis and other opponents of plastic bags is real.

A 2018 report from Loma Linda University was based on an experiment in which researchers purposely “contaminated” a reusable bag with a harmless form of a virus. A single shopper then went through a typical grocery store, and the research team tracked the spread of the virus.

Quoting directly from the executive summary of the report, “The data show that MS2 spread to all surfaces touched by the shopper; the highest concentration occurred on the shopper’s hands, the checkout stand, and the clerk’s hands.”

Additionally in 2012 epidemiologists from the Oregon Public Health Division and Oregon Health & Science University published a peer reviewed article in the Journal of Infections Disease that documented a reusable grocery bag was the point source in an actual virus outbreak in the Pacific Northwest.

For years, people have simply believed that people will wash their bags. But recent runs on hand sanitizer and toilet paper show society doesn’t always act with balance. Loma Linda researches found only 3% of bags get washed. With companies prohibiting reusable cups as a precaution, we should at least temporarily suspend government-mandated use of reusable bags, a known and documented risk.

Far from “doubling down” on a plastic bag ban that is of dubious environmental benefit and may in fact be a threat to public health, Davis and the rest of Albuquerque’s City Council should consider ending the plastic bag ban at least until fears of the coronavirus subside. Of course, common colds, the flu and other illnesses are a constant threat, so the Loma Linda University study’s findings should be of concern to all of us.

Perhaps a more realistic assessment of the pluses and minuses of plastic bags and other items might be in order at City Council – and Bernalillo County which has an even more onerous plastic ban in place? We’re not holding our breath for an outbreak of sanity to occur alongside that of coronavirus, but we can hope and hold politicians like Davis accountable.

The Rio Grande Foundation is an independent, non-partisan, tax-exempt research and educational organization dedicated to promoting prosperity for New Mexico based on principles of limited government, economic freedom and individual responsibility.

Update: on the same day this article was published in the Journal, New York State put its plastic bag ban on hold for health reasons. 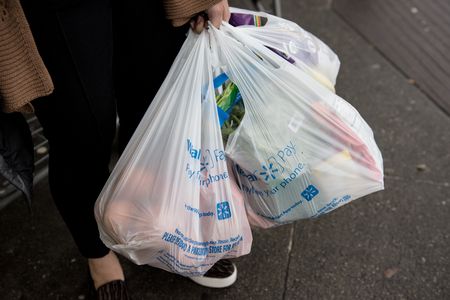 One Reply to “Coronavirus highlights problems with plastic bag bans”