This isn’t a rhetorical question. Rather, it is a question raised in a new article from The Atlantic magazine which is by no means a bastion of free market ideology.

Check out the chart below which graphs major cities by political ideology (the proxy being the Obama v. Romney vote, imperfect as it is) and housing prices: 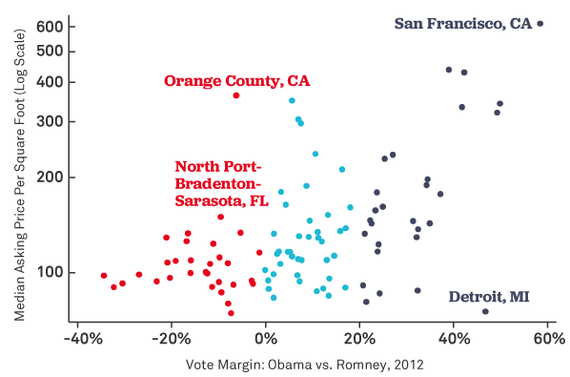 The trend is clear. Liberal cities are more expensive to live in than are less liberal cities. One theory that rings somewhat true from the article is that: “Rich liberals prefer to cluster near historic coastal communities with high home values, where they support high taxes, rent control, and a maze of housing regulations to protect both their investment and the region’s “character”, altogether discouraging new housing development that’s already naturally constrained by geography…”

But, it is interesting that New Mexico appears to be afflicted by many of the same issues as these rich coastal cities despite our relative poverty overall…especially when you think about the Rio Grande Corridor and housing regulations/zoning. And, of course, according to the liberal Center for Budget and Policy Priorities, New Mexico, a state that has relied on government like no other and been controlled by liberals for longer than any other, is the most unequal state in the nation:

One Reply to “Do liberal policies CAUSE greater inequality?”