The idea of putting solar panels on the Roundhouse parking garage is being pushed by an environmental group. The group managed to convince legislators to set aside $185,000 of taxpayers’ money aside for solar panels during the last legislative session, but alas (for them) Gov. Martinez vetoed it.

Readers in this space will know that we are not big fans of subsidies for ANY energy source (see chart below): 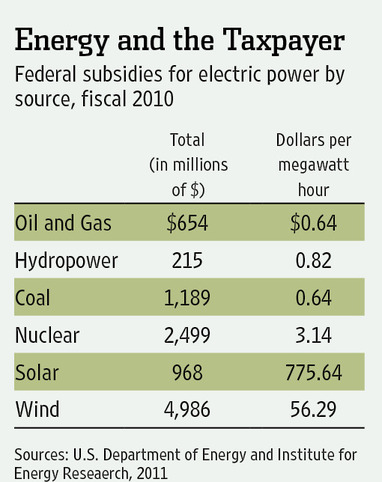 But that is not even the point when it comes to questioning the merits of this particular project:

1) The Roundhouse sits largely empty for 10 months out of the year (yes, there are interim committee hearings), will the electricity generated by sold on the grid?

2) Top electricity usage in the Roundhouse would be during the legislative session which takes place during January-February (or March) when the sun shines the least. How is this cost-effective?

3) While the group claims a repayment schedule that clearly seems to benefit taxpayers, can we get a full accounting of the costs and benefits of this project (including all subsidies) from a third-party auditor?

2 Replies to “Does solar really make sense for the Roundhouse?”