We at the Rio Grande Foundation talk a lot  about the need for the Legislature to embrace the concept of “right to work.” The idea is that workers should be free to join or pay dues to a labor union. In response, unions argue that they should be able to extract money from workers who don’t wish to affiliate with them because those unions “have” to represent ALL workers in that bargaining unit.

But, as Vincent Vernuccio of the Michigan-based Mackinac Center points out in a new column at National Review Online, “unions have lobbied very hard for a monopoly on representing all workers — even non-members — because it gives them a stronger hand at the bargaining table.” The answer, writes Vernuccio, is for policymakers to “call the unions’ bluff” and adopt a policy called “worker’s choice” that would allow workers to represent themselves while freeing unions from having to support non-members.

The idea that a third party that you do not support financially or philosophically can legally insert itself between workers and their employers is just bizarre on its face and illustrates clearly that unions are not like any other non-governmental organizations insofar as they can forcibly insert themselves between two voluntary actors. 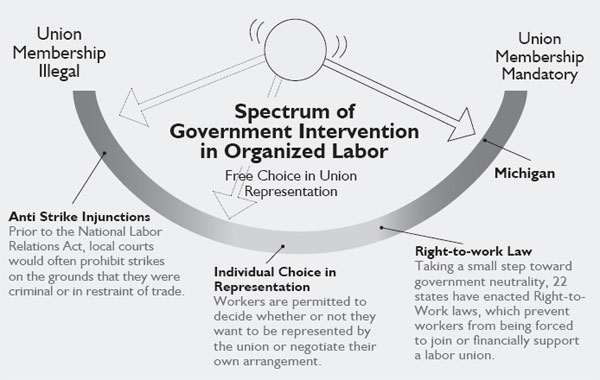 A perfect example of why an individual might want to negotiate their own salary came to us in the 2016 legislative session when the teachers’ unions successfully killed legislation allowing highly-trained “adjunct teachers” to teach in New Mexico classrooms. Even if the law were to be changed to allow those adjuncts, the union contracts would not be written in ways favorable to those teachers. Already, they would be forced to pay into a pension system that they’d never benefit from.

Ultimately, “worker’s choice” helps our educational system and workplaces in general go beyond on-size-fits-all approaches and allow workers to obtain the salary and benefits that make the most sense for them. And, if those “solo” workers miss out on union representation and feel that they are being taken advantage of by their employers, that will make them all the more likely to join and support the unions.

2 Replies to “Free the unions to only represent their members!”