As per the media reports, the Gov. has named her economic recovery council. You can find all the members listed here.

Our initial reaction at the Rio Grande Foundation is “it’s about time.” New Mexico’s economy has been in lock-down mode for nearly 2 months. Oil and gas prices/revenues have plummeted and New Mexico faces unprecedented budget and economic issues per Speaker Egolf.

At RGF we are not overly concerned that the group will meet in private, but the reports issued to the public in a timely fashion and MUST be clear and concise. We the  people MUST be given thorough reports on the topics being discussed and what the various people are advocating.

Which leads to our third major point: several of the task force members are directly involved in businesses that receive funding/special favors from New Mexico Government and her Administration.

The film industry is the most notable example and major recipient (according to the LFC they’ll get $750 million over 5 years) so Brian O’Leary will be able to defend those subsidies from the inside. Peter Trevisani of the NM United will be on as well. His team got $4.1 million for a proposed stadium in the 2020 session. Finally, Jeremy Turner runs a company that is involved in “renewable” energy particularly in the transmission field. While it is hard to discern exactly how much in the way of government subsidies and favors his company received, it is clear that the Gov.’s policies have favored his industry from the Energy Transition Act to the reinstatement of solar incentives.

We at the RGF don’t know ALL of the members, but have worked with Brian Moore and Carri Phillis, both of whom will carry the weight of advocating for fiscally-conservative and economically-open policies. It will be interesting to see if they are able to influence the group and its (and the Gov.’s) decisions. 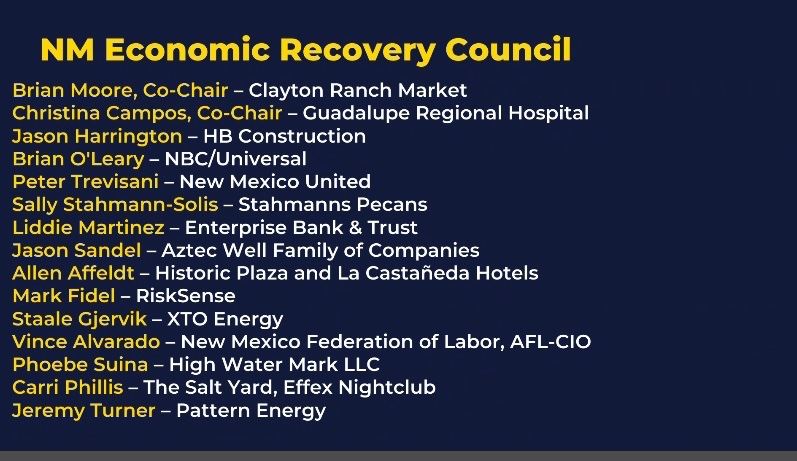