In its constant search to put more of New Mexico’s economy under government control, a few years ago the Democrat-controlled Legislature signed off on a study to consider “universal” health care in the State.

Most “realistic” universal health care programs rely heavily on a seemingly-endless supply of federal dollars to stay afloat, but a number of states have had such programs and abolished them when they became financially unsustainable.

Here’s an article about the plan with a link to the full paper here.

The conclusion of the report shows just how costly “free” health care can be. As the report states, “premiums for other families, employer contributions and payroll taxes likely would go up to pay for what could be as much as a $5.8 billion shortfall for the program over the first five years.” New Mexico’s annual budget is $7.0 billion annually, so we’re talking a shortfall of $1.2 billion or so out of that budget.

Furthermore, the study notes, “While the goal is to have all New Mexicans insured, the study acknowledges that the gains in coverage may be overstated since many uninsured residents are already eligible for Medicaid.”

States as diverse as Vermont and California have tried and failed to implement single payer systems in recent years. Since states can’t print money like Washington, DC, one suspects that this report will not provide much impetus for adopting such a plan here in New Mexico. 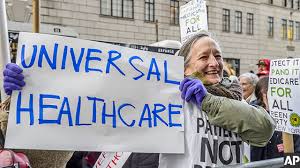