New Mexico always seems to stand out on a map. Sunday’s New York Times reports on projected changes in the number of high school graduates and its consequences for future college enrollment across the country. The article features this map based on the Interstate Commission for Higher Education’s projections for 2015: 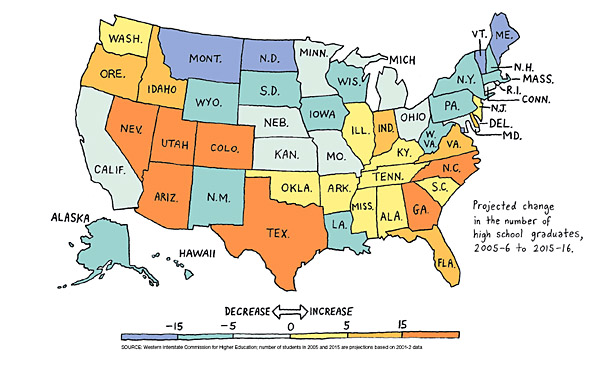 That bluish hue indicates that New Mexico should expect a smaller class of graduating seniors a decade from now. The Western Interstate Commission for Higher Education has further projections, up to 2017-18, that reiterate this expected trend.
Why is New Mexico’s population of high school graduates expected to fall, as every one of our neighboring states will see increases? One clue lies in the breakdown WICHE provides by race/ethnicity.
Let’s take a closer look…

While projected numbers for Hispanics and other “underrepresented” groups are quite stable, graduating seniors identified as “White, non-Hispanic” are on a steady downward trend from a peak in the 1999-2000 school year.
A child graduating high school in 2018 was born around the year 2000. As such, these projections are based on past demographic data, and we can work backwards to find the source of this trend. The steady decline in “White, non-Hispanic” high school graduates could potentially be explained by two related factors: 1) a decline in “White, non-Hispanic” birth rates in the 1980-90s, and 2) a decline in the state’s “White, non-Hispanic” population overall. Over time, of course, #1 causes #2. What’s been going on in New Mexico?
Digging into archival census data, it’s clear that #1 is the dominant factor. New Mexico’s “White, non-Hispanic” population grew nearly 18% from 1981 to 1999, slower than the other racial/ethnic groups, but growth nonetheless. But this is an aging population, not reproducing as rapidly as the other racial/ethnic groups.
In 1981, “White, non-Hispanic” children under 5 years old numbered 50,266, 41.6% of the states youngest children. These are the infants that would fuel the peak in “White, non-Hispanic” graduation 18 years later. At this peak in 1999, however, the next generation of “White, non-Hispanic” children under 5 numbered only 42,025, just 32% the state’s youngest cohort.
One other possibility comes to mind–the high degree of racial admixture in New Mexico. I’ve been unable to find any data on this point, but many so-called “non-Hispanic” parents have “Hispanic” children. Children under 5 identified as “White, Hispanic” numbered 68,054 in 1999, up from 53,359 in 1981, enough to make up for the difference. But this fails to explain the overall drop in projected high school graduates.
Whatever the cause, the relatively low replacement of those self-identified as “White, non-Hispanic” will have a dramatic impact on more than just the make-up of New Mexico’s high schools. Lower public school enrollment and fewer high school graduates imply a smaller pool of students for the state’s university system. A shrinking supply of young, educated, and skilled workers does not bode well for New Mexico’s economy in the 2010s and 2020s.
We can’t beat demographics–those students in the projections have already been born. However, we can still prove the predictions wrong. Improving the high graduation rate from our dismal 56.7% (free registration required) could add thousands of educated young workers to the labor pool, and is an obvious place to start. New Mexico’s universities could also make recruiting qualified out-of-state students a priority, a tactic employed successfully by the University of Oklahoma.
Finally, since we’ve already got unbeatable weather, nothing attracts the young, industrious entrepreneur better than free markets and personal liberty.