According to news reports, Gov. Lujan Grisham vetoed a “pork” bill that would have included $50 million in legislative projects. The bill was passed in the 2022 session and according to news reports the move upset legislators on both sides of the aisle with Senate Minority Leader Greg Baca, a Republican from Belen, Rep. Patty Lundstrom, a Gallup Democrat who chairs the influential House Appropriations and Finance Committee, and Rep. Derrick Lente, D-Sandia Pueblo all speaking out in opposition to the Gov.’s move.

As seen below in a meme put out by the Republican Party, these local priorities run the gamut. And, as we’ve critiqued this spending in the past, there is really no process for ensuring that these tax dollars are allocated in any rational way for the betterment of our State.

So, are we “marching in the streets” in support of Lujan Grisham’s veto? Not really. Simply put, the overall budget grows State spending by more than $1 billion in a single year (way too much).

We’re also NOT joining some prominent members of the GOP (or Democratic Party) for a special or even an “extraordinary” session as candidates would have to put their campaigns on hold and there is simply too much mischief that could happen on a variety of issues in such a session, especially when one Party, the Democrats, controls all the levers of power.

So, the Gov. has made her vetoes upsetting legislators of both parties in an election year. The capital outlay process remains broken. Another session would be a mistake. 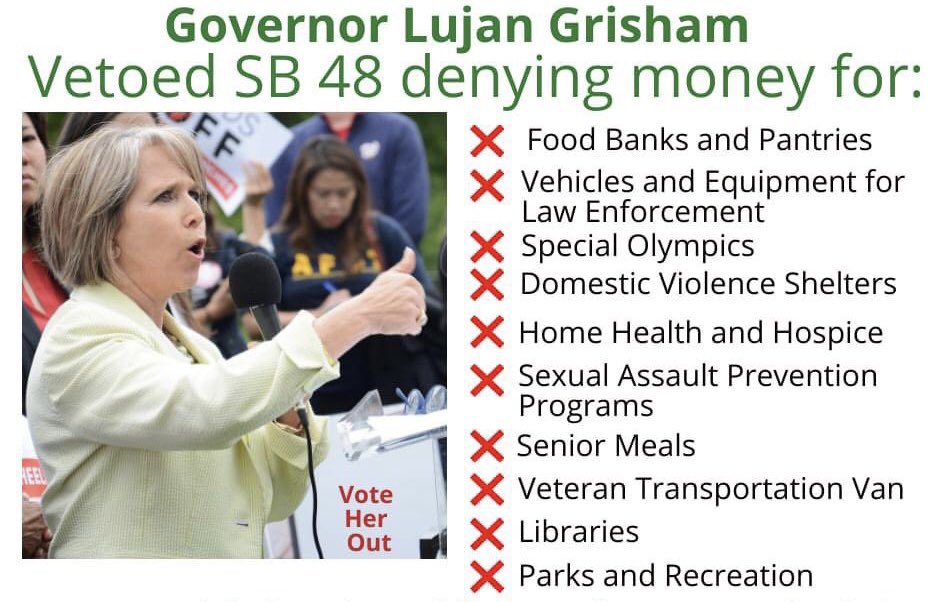