In case you missed it, yet another report came out this week stating that the level of methane emissions from fracked natural gas wells is relatively low. The new study states that methane releases are 97% lower than previous estimates. Researcher Jon Entine has an interesting piece on the issue over at Forbes including the controversial stances of two Cornell University researchers.

What is not controversial is that fracking is good for the economy as a new report from Businessweek illustrates. How good?

In 2012, the energy boom supported 2.1 million jobs, added almost $75 billion in federal and state revenues, contributed $283 billion to the gross domestic product and lifted household income by more than $1,200…the competitive advantage for U.S. manufacturers from lower fuel prices will raise industrial production by 3.5 percent by the end of the decade.

Given all of that, it is no surprise that the center of the fracking boom, North Dakota, has seen its economy go gangbusters according to this article from CNN. As the map below shows, North Dakota grew by 13.2% in 2012 while Texas did very well at 4.8%. New Mexico performed poorly at 0.2 percent growth: 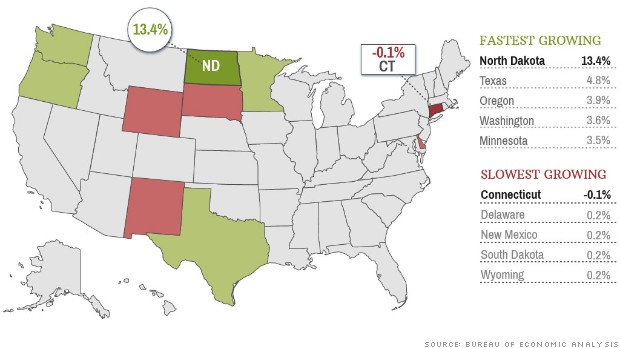 As the RGF’s new report shows, federal ownership of so much of New Mexico’s land is one factor holding us back from North Dakota or even Texas-style growth.