Never let a crisis go to waste. That has been the mantra on the left for decades although former Obama advisor Rahm Emmanuel was among the most notable to actually utter it publicly.

There can be no doubt that the current crisis presents both peril and opportunity for New Mexico’s political leaders. The left led by Voices for Children (as illustrated in the tweets below) shows what they are thinking: Raise taxes!

New Mexico Republicans have largely been out of power for 90 years. They had virtually nothing to do with the recent overspending from “progressive” Democrat Gov. and Legislature. They didn’t shut down the economy. The GOP has a rare chance to push back against likely efforts to raise taxes by actually shrinking New Mexico’s bloated government.

Signing the Rio Grande Foundation’s pledge not to raise taxes due to this crisis would seem to be an obvious opportunity to differentiate the GOP in particular from the opposition. We have collected signatures from Republicans, Democrats, and Libertarians, but for a GOP which has been out of power for so long it is surprising that some remain unwilling to publicly and emphatically state that tax hikes are NOT the answer to the current crisis.  You can reach your legislators here. Ask them to sign the pledge. 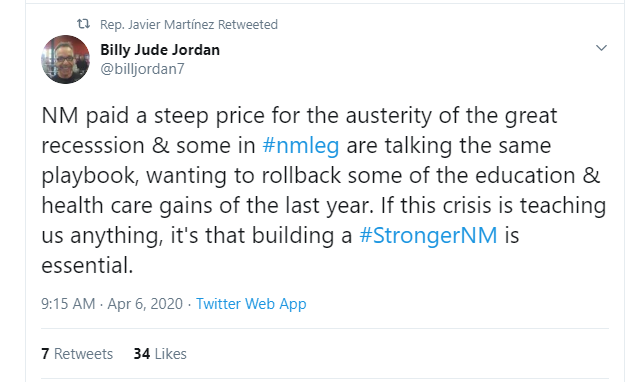 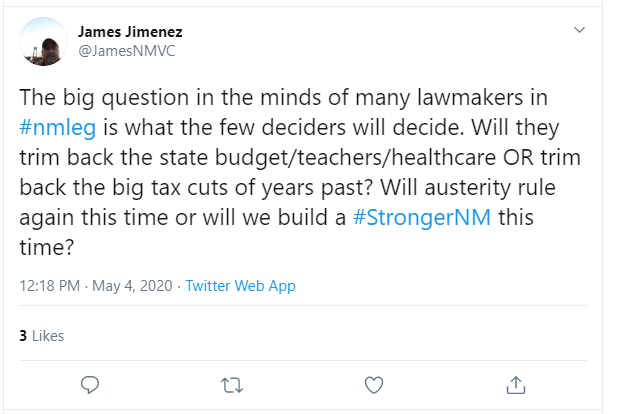