Airlines are in the news these days. The Obama Administration has put a stop to the proposed merger of American Airlines and US Airways arguing that it will harm consumers through higher costs and reduced competition.

Then, there was this column from leftist Harold Meyerson of the Washington Post arguing that today’s airline industry is a useful metaphor for the deterioration of the middle class in America. I think Meyerson’s metaphor is apt although he does not fully flesh it out and fails to see reality.

As the chart below, airline fares have fallen dramatically since the airlines were deregulated by Carter and Ted Kennedy in the 1970s: 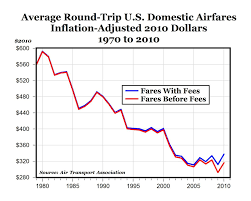 Also, more Americans than ever are flying and they are doing so more safely.

And, yes, as Meyerson and his left-wing ilk are eager to point out, there are some airlines that will charge extra for just about everything on a flight and some other airlines that are providing more luxuries than ever. That is called choice. Some people want a hot towel and plenty of leg-room. Some want to get from A to B as cheaply as possible.

Unfortunately, the modern left, whether that be Meyerson or Obama (or Michael Bloomberg), believe that they know what is best for you and me. Instead of using another airline if prices go up, Washington steps in and makes the decision.

One Reply to “Of airlines, deregulation, and class-warfare”