It figures that outgoing Albuquerque City Councilor Rey Garduño is a fan of the Rail Runner. He outlines the supposed reasons for his passenger rail fetish in today’s Albuquerque Journal.

Unfortunately, whenever he discusses specific justifications for the train, he turns to generalities like “Ample evidence exists that a high-quality transit system can make a region more competitive in attracting new workers and businesses.” What evidence? Is transit a cause or an effect? What did the Rail Runner do to boost New Mexico’s economy or that of the Santa Fe/Albuquerque corridor? Of course, he admits that the Rail Runner had no impact in the very next paragraph.

Garduño ultimately embarks upon a series of half-baked arguments as to why roads are MORE subsidized than transit which is silly as the chart from the American Dream Coalition confirms (remember that the Rail Runner is THE MOST HEAVILY SUBSIDIZED transit system in the nation in terms of operating costs (less than 10% fare box ratio) so it is going to be much worse than other commuter rail systems: 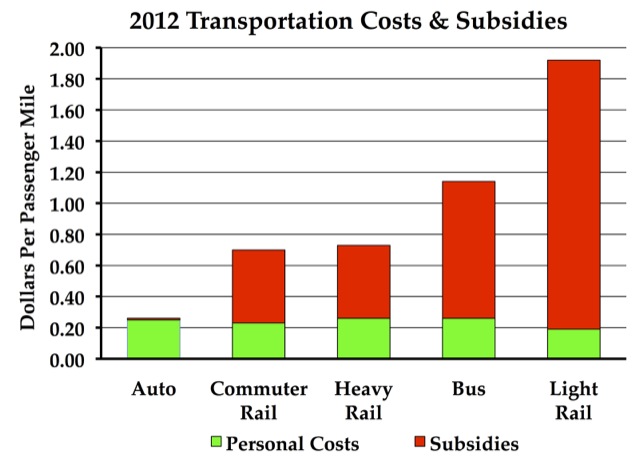 And lastly, there is the utility of roads vs. transit. Transit is a perk or service, not a necessity. No housing development or business will locate where you ONLY have transit and no roads. You can’t get emergency services from a train. You can’t make deliveries on the Rail Runner. Roads are a necessity. In sparsely-populated New Mexico, transit is an expensive luxury. If the Big I was destroyed tomorrow. It’d have to be rebuilt starting the next day lest the region’s economy fall into a steep decline. If the Rail Runner went out of service for good there would be little to no impact on our economy.

Unfortunately, Garduño who represents a poor and economically-distressed area, seems to believe that using taxpayers dollars for wasteful luxuries is a great idea.