Ben Ray Lujan doesn’t want to debate Mark Ronchetti in the race for US Senate. But, he DID take time over the Labor Day Weekend to attack Mark Ronchetti for saying, as he did during an RGF-sponsored “Liberty on Quarantine” event back in May, that he supported “Right to Work.”See for yourself in the Tweet below:

Labor Day should be a time to reflect on how to improve working conditions and keep workers safe.

Interestingly, while the Gallup polling company releases a poll on labor issues every Labor Day they stopped asking questions about support for Right to Work back in 2014 when overwhelming majorities of Americans (regardless of political party) expressed support for such laws which simply allow people to choose whether they want to support a union by paying dues or fees.

Thanks to the Janus v. AFSCME Supreme Court decision of 2018 all government employees in America now operate under such laws, but in New Mexico, private sector workers still may be required to join a union. Ben Ray Lujan is on the losing side on this issue, but he knows the unions are major financial supporters and have lots of manpower to help in political campaigns. 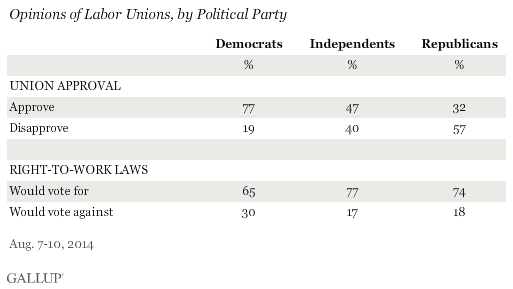