The following ran in the Albuquerque Journal on May 26, 2021. It was written by Roswell Mayor Dennis Kintigh who has some serious questions and concerns over the way in which Gov. Lujan Grisham has handled the reopening of New Mexico due to COVID. Kintigh specifically wanted the chart below the article to be included:

Another two weeks have passed by and another paint-by-numbers color chart has been released by the assembly of experts in Santa Fe. All but one county in New Mexico has been blessed and anointed with the sought-after turquoise. The one outlier is my own Chaves County where Roswell is the county seat.

Since the beginning of this crisis, and the associated lockdown, I have been mystified by the edicts issued from Santa Fe. A year ago the pandemic was essentially nonexistent in Chaves County, yet at that time the policy was “we are all in this together.” As a result, Roswell schools were closed, restaurants shut down, graduation ceremonies cancelled and even weddings and funerals disrupted.

Somewhere, somehow, the “all in this together” went away, and then each county was judged upon its own performance. OK, that is acceptable, except that we, the unwashed masses, don’t get to see the data used to grade our progress. The criteria to get the adored turquoise designation currently involves three standards.

First, there are to be no more than 10 new cases per day per 100,000 county residents, on average, over a two-week period. That, however, is not the number of new cases reported each day. The number reported on a specific day could include cases diagnosed three days earlier or a week earlier or whenever. We don’t know.

Secondly, the percentage of COVID tests that are positive are to be 7.5% or less. The number of tests conducted has declined significantly since the beginning of the year and the data available shows nothing about positive rates. As of May 18, Chaves County had, per the DOH website, 108,263 tests completed. The number on March 16 was 95,015. In 73 days a total of 13,248 tests had been conducted or only 181 per day in a county of over 65,000 residents.

Finally, the fully vaccinated percentage is to be 40% or better. While I fully support getting the Trump vaccine – my wife and I both have been vaccinated – I know people who choose to not get vaccinated. In Roswell we are still free Americans, so that is OK by me.

At this time Chaves is the only green county; however, three other counties – Torrance, Roosevelt and Curry – all of which are turquoise, have worse numbers than Chaves County in all three categories. Torrance County fails all three of the criteria. Roosevelt and Curry actually fail two of the three. In fact, Santa Fe County, the seat of all wisdom, knowledge and power, is worse than Chaves in cases per 100,000 and positivity on tests.

We have been told repeatedly to “follow the science.” How about just “following the numbers,” or better yet how about if Santa Fe quits pretending it knows what it is talking about. 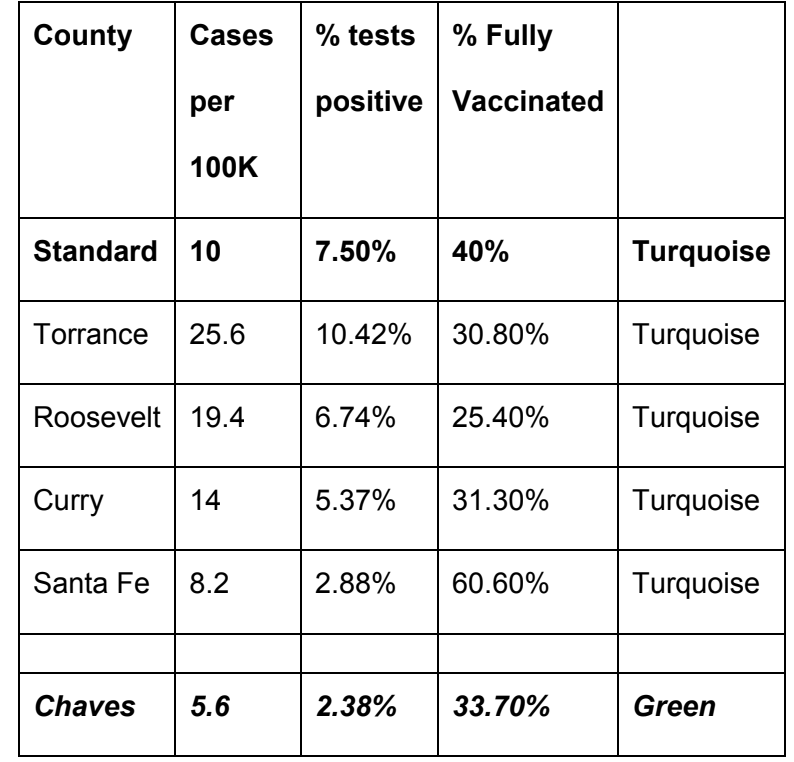