When she came into office in 2019 one of her very first policy initiatives was to expand New Mexico’s 25% film subsidy (it’s a rebate, not a tax credit). No more annual spending caps and 25% became the baseline as subsidies rose as high as 35%.

The critical line comes from page 24 of the “study” highlighted below:

Why is this the critical point? Simply put, the State has to get the money it spends on film subsidies from somewhere and that requires economic activity. The fundamental flaw with so many economic analyses that attempt to justify government subsidies (spending) on behalf of economic development is that it fails to account for the amount of economic activity that must happen in order to generate $1.00 of tax revenue (this is not necessarily the case for tax breaks or exemptions that merely remove a tax on a business or industry and thus still have overall positive economic impacts).

From the perspective of simplicity, New Mexico’s GRT and income taxes are levied at the same rate ≅ 5%. Thus, New Mexico needs about $20 of economic activity in order to generate a single dollar of tax revenue.

So, taking data directly from the report (page 4), to break even on $1 of film subsidy spending New Mexico would need ≅ $20 times in more or less organic economic activity. Thus, to break even on $160 million in film credits issued, the State would require not the $854 million in direct economic output generated, rather it would need to generate $3.2 BILLION in economic output.

The Legislative Finance Committee in 2019 acknowledged that the film subsidy program actually costs the State money. The following is from a post-session LFC slide presentation. 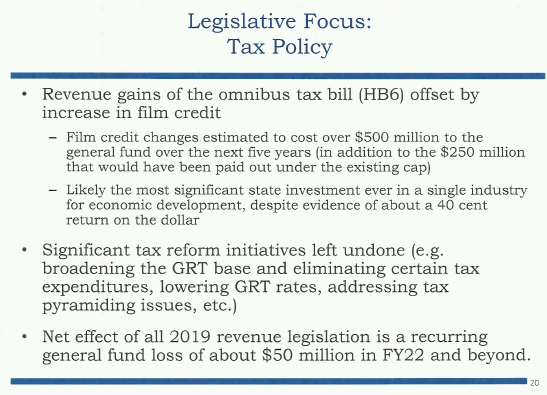