Fresh off my response to Councilor Rey Garduño on the Rail Runner, readers of the Albuquerque Journal were treated to the latest bad financial news about the train. Specifically, new federal regulations called positive train control which has received a great deal of attention in the wake of a Philadelphia Amtrak crash, is set to cost the State and the Rail Runner another $50 million.

Interestingly, while so many on the left think the government is there to protect them, New Mexico is now lobbying the federal government abandon the regulation. Funny how government bureaucrats can be so insensitive to regulations when they are imposed upon average businesses, but will use their tax-funded positions to postpone costly regulations facing them.

Unfortunately, the $50 million is just the start. According to the article, the train also faces $25 million worth of “midlife” refurbishing.

Perhaps the silver lining is that, with all of these expenses piling up, Gov. Martinez may finally realize the wisdom of the statement that when you are in a hole, the first thing to do is stop digging.

Contrary to the alleged wisdom of one of today’s syndicated columnists, the American rail system is indeed robust and functional. The component that works is relatively un-subsidized and transports massive amounts of freight. Unfortunately, leftist supporters of “trains” don’t really care for freight rail. They want to use your tax dollars to support passenger rail no matter what the costs. As the following chart shows, passenger rail subsidies are actually quite high, much higher than roads and air travel. How much is enough subsidy for trains? I don’t think they have an answer to that question. The answer, like their answer to most questions about how much spending is enough is always “more.” 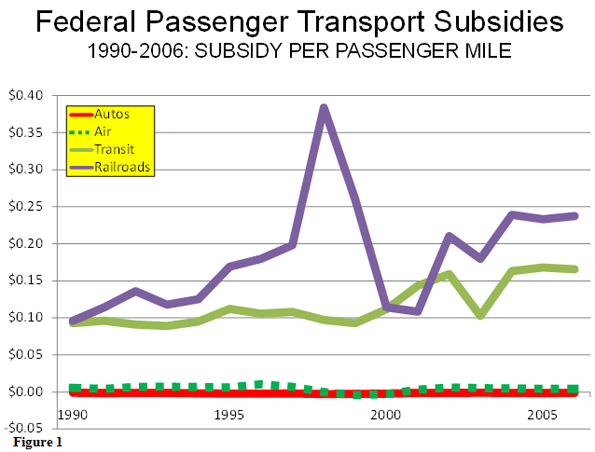