Trump supporters got what they’d hoped for on Election Day as “The Donald” is now the President-elect. Republicans nationally also performed well holding on to the US Senate and the House.

And, New Mexico Republicans notched some big victories as well. The two most important races were Majority Leader Michael Sanchez who was defeated and Judith Nakamura who won her race thus maintaining her seat on the Supreme Court. If you’d told me going into the election that these two races went the Republicans’ way, I’d have said it was a good night for Republicans in New Mexico…but it wasn’t.

There are still recounts to be held, but the Republicans lost the House and likely lost a few seats in the Senate. In other words, for at least two years and possibly more, the Democratic Party which has controlled New Mexico for most of its history, leading it to 49th and 50th rankings in so many areas, has been given the reins of control again after a mere two years of Republican control in the New Mexico House.

Here are a few of the races that tell the story of Election Day in the New Mexico Legislature.

Rep. Paul Pacheco (R) v. Damon Ely: There will be a recount, but Republican Pacheco is likely out;
Christina Hall (R) v. Liz Thompson: This was a tough race to succeed Rep. Conrad James in a 50/50 district. Thompson won comfortably;
Rep. David Adkins (R) v. Ronnie Martinez: This Northwest Albuquerque race was not on my radar screen heading into election night. Adkins has been a consistent voice for fiscal restraint in Santa Fe. As of this writing Adkins is up by a mere 2 vote margin. A recount will follow.
A few races went well for Republicans. Rep. Sarah Maestas-Barnes won a tough race and Republican Rebecca Dow will succeed Republican Dianne Hamilton, but the Democrats will soon be discussing leadership positions and laying out legislative priorities in the coming 60-day session.

In the Senate, once you get past Greg Baca’s convincing defeat of Michael Sanchez, thinks turn very bleak for Republicans. None of their pickup races in 50/50 districts panned out. Diego Espinoza was thought by many to have an inside track against incumbent Democrat John Sapien. Espinoza lost by 150 or so votes, but there may be a recount. Republican challengers Ceil Levatino and Eric Burton went down to defeat and Ted Barela who had been appointed by Gov. Martinez to fill seat of disgraced former Sen. Phil Griego lost.

In summary, with a few notable exceptions, Republicans took it on the chin in legislative races. Gov. Martinez will have
an even tougher time getting any of her agenda passed in Santa Fe. Right to Work and other economic reforms are highly-unlikely. And, while Michael Sanchez may have been singularly difficult to deal with, Democrats will be anything but chastened by these results. They are not likely to give Martinez an inch.

In other words, in a “anti-status quo” election, New Mexico reverted to “status quo” in a big way. More to come on what this means for New Mexico’s economy and the gubernatorial election which is right around the corner. 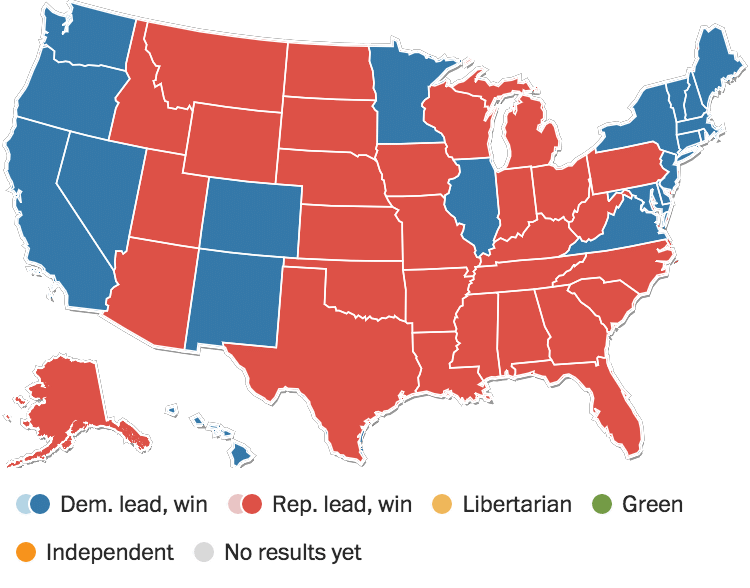 6 Replies to “Thoughts on the 2016 election from New Mexico”