As we’ve already noted, the main problem with Gov. Lujan Grisham’s plan to slightly reduce GRT rates by .25% is the fact that the real problem with the tax is taxation of services as business inputs.

In every area of the State we’ve seen tax rates rise dramatically over the years. The chart below reflects Albuquerque’s rapid climb over the years to the current gross receipts tax rate of 7.875 percent. Rio Rancho’s rate is now 7.6875%. You can find a full list of local GRT rates with rates ranging to over 9%. Relative to Albuquerque’s overall GRT rate, a .25% cut is a 3.17% reduction in the GRT.

In addition to addressing taxes on business inputs and services, the Legislature needs to address local taxation authority and constrain the ability of local governments to raise rates. 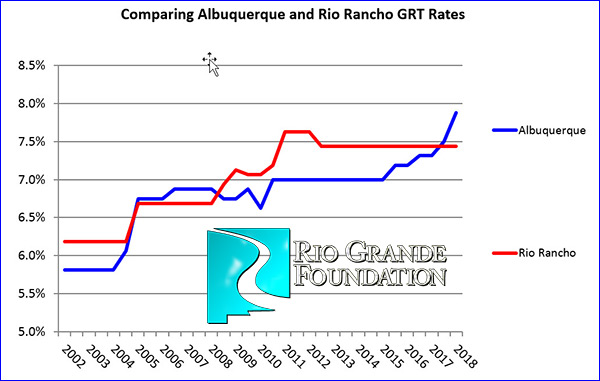 4 Replies to “More analysis on the MLG’s GRT plan”