An example of the latter is remote or telework. Nationally, the transportation sector contributes 28 percent of all greenhouse gas emissions—the most of any sector—and personal vehicles make up more than half of those emissions. Obviously, not ALL of those are for commuting, but some significant percentage are.

Demographer Wendell Cox has analyzed the latest Census Bureau report called American Community Survey, which reveals a tripling of working from home in 2021, while transit use dropped by more than half from the 2019 pre-pandemic rate.

Cox noted that auto use dropped to the lowest point since before 1970, though it remained the principal means of commuting while Transit commuting dropped to its lowest level in six decades of Census Bureau reporting (2.5%). Today in America 10 times more Americans walk to work or work from home than use mass transit.

New Mexico saw a jump of 10 percentage points in the number of people telecommuting or working remotely as seen below. This means less traffic and less gasoline burnt both sitting in traffic AND commuting.

Yet politicians from the Biden Administration to our own here in New Mexico continue to pump billions of dollars into transit systems like the Rail Runner that no one is riding. 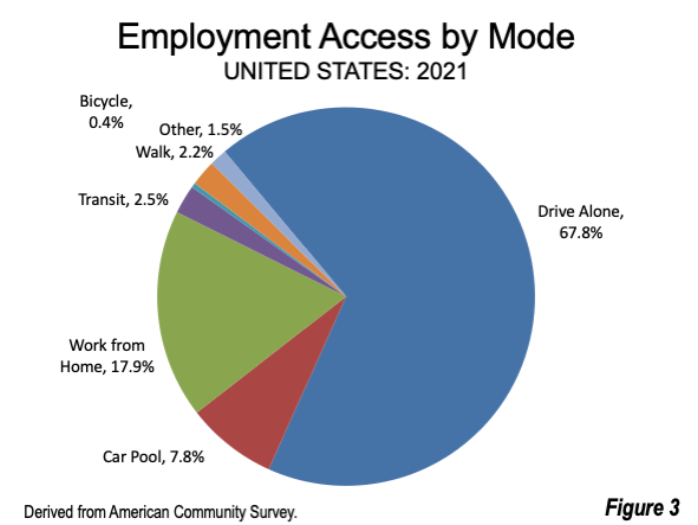